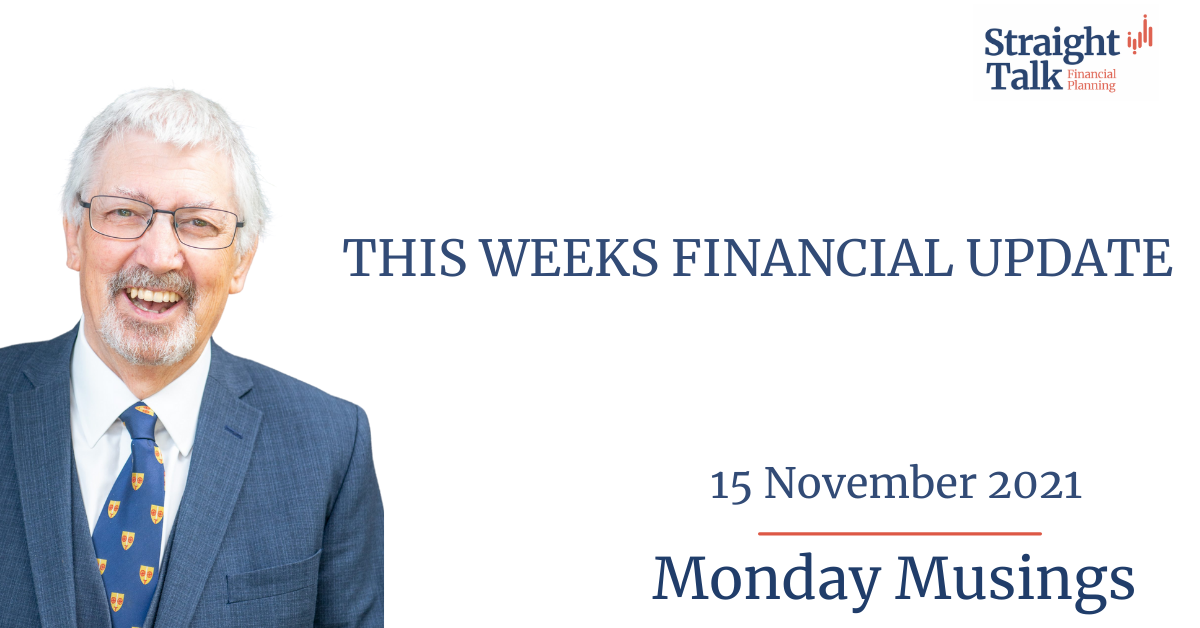 I have been trying to write a piece that would satirise the people we have elected to run our country but decided that as a famous satirist whose name escapes me said they are beyond satire. I shall instead give you a flavour of the reading we do to keep our clients investments working hard. What follows is an abridged version of the whole document from Brewin Dolphin.

Stock markets were mixed last week as investors weighed a rise in US inflation against the EU’s more optimistic economic growth forecasts. The S&P 500, Dow and Nasdaq fell 0.3%, 0.6% and 0.7%, respectively, after the headline consumer price index (CPI) increased at its fastest annual pace since 1990. This overshadowed news that weekly jobless claims had reached a new pandemic-era low. In contrast, the pan-European STOXX 600 added 0.7% as the EU raised its economic growth forecast for the Eurozone and industrial production fell less than expected.

Over in Asia, the Shanghai Composite added 1.4% following reports that Beijing is considering easing rules to let struggling property developers sell off assets to avoid defaults.

The FTSE 100 was little changed after Bank of England Governor, Andrew Bailey, said he was ‘very uneasy’ about rising inflation and had come to close to voting for an increase in interest rates when policymakers met earlier this month.  At the start of trading on Tuesday, the FTSE 100 was 0.2% weaker as investors considered the latest employment data from the Office for National Statistics (ONS). The number of payrolled employees rose by 160,000 to 29.3m between September and October despite the ending of the furlough scheme. The unemployment rate fell by a bigger-than expected 0.5 percentage points to 4.3%. The figures are likely to fuel speculation that the Bank of England will increase the base interest rate when it meets in December.

US inflation the highest in three decades; Last week’s economic headlines were dominated by the latest inflation figures from the US, which revealed the headline CPI rose to 6.2% in October from a year ago, the fastest pace for three decades, largely because of faster-than-expected rises in the cost of fuel and food. Compared with a month ago, prices surged by 0.9%, well above the 0.6% rise forecast by economists. Core inflation, which excludes energy and food, also rose more than expected by 0.6% from the previous month. The data came a week after Federal Reserve chair Jerome Powell admitted that high inflation was lasting longer than anticipated and it was difficult to predict the persistence of supply constraints. Concerns about rising prices saw US consumer sentiment decline to its lowest level in a decade. The University of Michigan’s consumer sentiment index fell to 66.8 in November, down from 71.7 in October and well below the expected 72.4. Richard Curtin, Chief Economist of the University’s consumer surveys, said the decline was driven by “an escalating inflation rate and the growing belief among consumers that no effective policies have yet been developed to reduce the damage from surging inflation.” Supply issues hit UK GDP growth here in the UK, data from the ONS showed the impact that supply chain problems are having on UK economic growth. GDP grew by an estimated 1.3% in the third quarter (July to September), a marked slowdown from the 5.5% growth seen in the second quarter when there was an easing in many Coronavirus restrictions. The growth rate was below the 1.5% forecast by the Bank of England, with shortages of goods, labour and components weighing on activity. The monthly figures showed GDP grew by 0.6% in September but remained 0.6% below the pre-Pandemic level. Services output grew by 0.7% as the number of face-to-face appointments at GP surgeries grew, whereas production output declined by 0.4% following two consecutive months of growth.

So, to the markets.

There are two worlds when it comes to retirement

There are two worlds when it comes to retirement - Monday Musings 08/11/2021 I have just read an article about the university lecturers who are going on strike because they.

Was it worth the wait?

Was it worth the wait? Monday Musings 28/10/2021 - Part 2 Having watched our Chancellor deliver his budget yesterday its fair to say that, from a Financial Planning perspective, none.