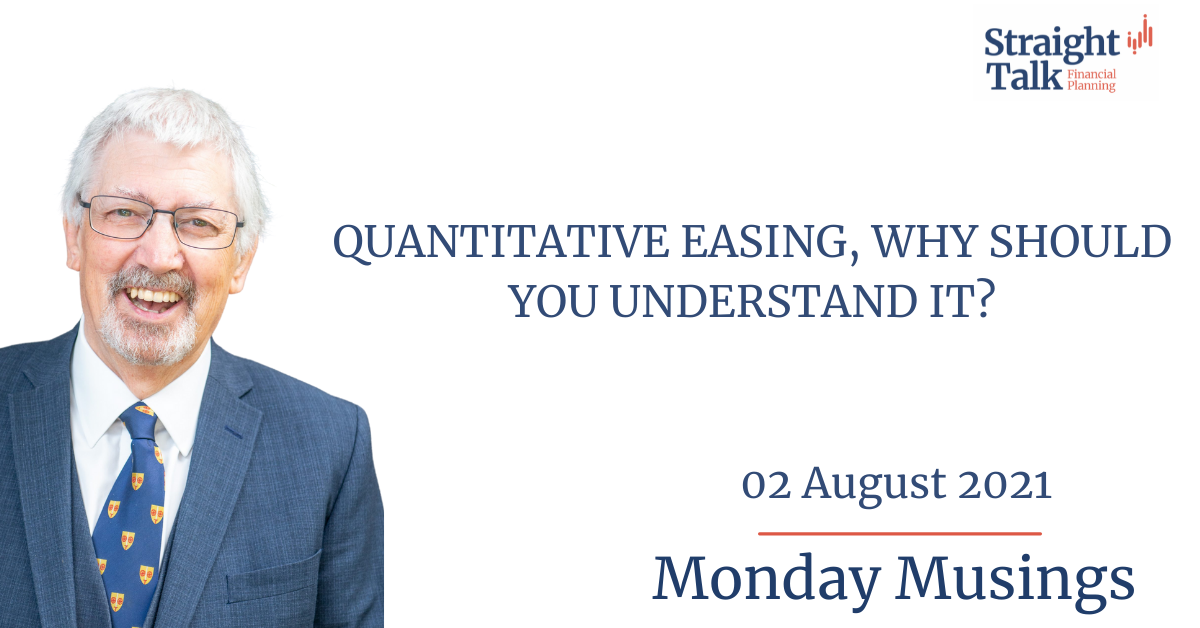 Quantitative Easing – why should you understand it? Simply it impacts on almost all of your life.

You have probably seen or heard commentators talking about the Bank of England (BOE)using quantitative easing as part of their role in managing the rate of inflation in the UK. It sounds terribly complicated, but in essence is a simple concept. I will explain it simply below.

Why does the BOE use quantitative Easing?

It’s their job to keep the prices of things you buy low and stable, as this helps to support people’s jobs and incomes. Rising prices is called Inflation and the UK Government has set the BOE an Inflation target. To keep inflation on target they usually change a key interest rate in the economy (called Bank Rate). Changes in Bank Rate feed through to how much interest you get on savings, and how much interest you pay on a loan. That affects the amount of spending in the economy and so helps inflation to either fall or rise.

But things changed during the Global Financial crisis that began in 2008. At that time, they quickly reduced Bank Rate from 5% to 0.5% to help the UK economy recover. Even with Bank Rate that low, they needed to do more to boost the economy and meet their inflation target. That’s where Quantitative Easing comes in.

How does quantitative easing work?

Quantitative Easing (or QE) acts in a similar way to cuts in Bank Rate. It lowers the interest rates on savings and loans. And that stimulates spending in the economy. Here’s how QE works. The BOE buys UK Government Bonds (GILTS) or Corporate Bonds from other financial companies and Pension Funds. When they do this, the price of these Bonds tend to increase which means that the Bond yield, or ‘interest rate’ that holders of these Bonds get, goes down. The lower interest rate on UK Government and Corporate Bonds then feeds through to lower interest rates on loans for households and businesses. That helps to boost spending in the economy and keep Inflation at target.

To understand how the price of something affects the yield or interest rate on something think about buying a house and letting it. If you buy a house for £100,000 and let it for £10,000 per annum the yield is 10%. If the price of that house goes up to £200,000 but the rent remains at £10,000 the yield has halved to 5%.  The purchase price of any commodity including GILTS or Corporate Bonds is driven by demand and supply. You will have seen that the price of many of the things you buy each day has risen because of the supply problems caused by Covid and Brexit.  This equation works throughout the world of Finance and Investment.

QE also affects the prices of other assets like shares and property. Here’s an example. Say they buy £1 million of Government Bonds from a Pension Fund. In place of those Bonds, the Pension Fund now has £1 million in cash. Rather than hold on to that cash, it will normally invest it in other financial assets, such as shares, that give it a higher return. In turn, that tends to push up on the value of shares, making households and businesses holding those shares wealthier. That makes them likely to spend more, boosting economic activity.

Many of you will have heard my explanation of UK Government Bonds (GILTS) and Corporate Bonds and how they work. If you would like to chat to me about these please do get in touch. Usual ways email david@straighttalkfinancial.co.uk or telephone 02380243665.

Just Too Late - Monday Musings 20/09/2021 I have just returned from visiting my family in Guernsey. Among my relatives one runs an offshore trust company, and another has a.

What We Pay For

Monday Musings 13/09/2021 - What We Pay For I am reminded each week that David Stewart, or the Sage of Hampshire, manages to predict the important news stories.  Unfortunately, he’s.

Facing Reality - Monday Musings 06/09/2021 Uniquely I would like to start this week by welcoming a new reader, welcome Mr F glad to have you on board. I was.