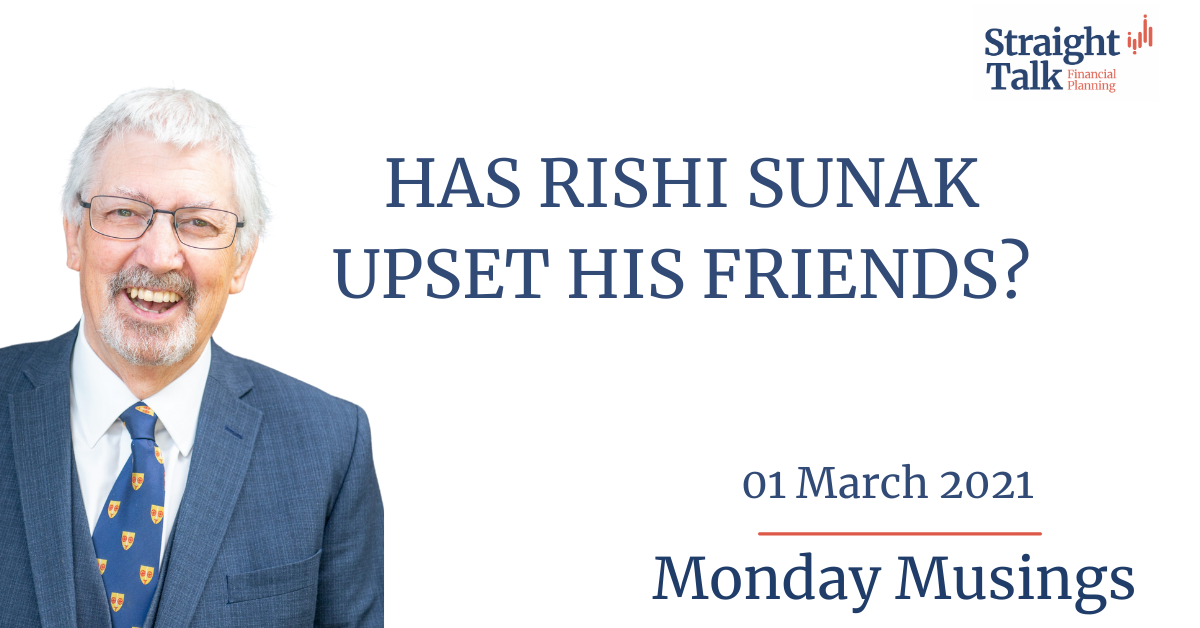 Has the UK Finance Minister upset his friends?

As you know I normally look back over the fun and games of the last week at how the markets have reacted, but this week apart from a brief comment on the FTSE100 which had a poor week, down 2%, on fears of inflation along with the DAX and CAC40. The issue at stake here is economies over heating because of the support being given by governments and central banks. More of this next week.

The issue that Rishi, UK Finance Minister, has is the same as one of us taking out a mortgage at a rate we can afford, just, but without any guarantee that the rate will remain low. We must hope that we will get a pay rise in time. Rishi must find the money to pay the bill. The only way he can get a pay rise is to raise taxes OUCH.

Rishi may well be going to upset some of his old school pals, Winchester College Alumni, or his old city friends if he goes ahead with the changes that are being mooted. These would see the wealthiest members of society paying most of the bill. This is a good thing if you believe that the rich should be responsible for most of the Covid mortgage, but probably not if you went to Winchester College.

It looks likely that he will raise corporation tax from its current19% to 23% over the lifetime of the Parliament. Although a big increase with the USA also likely to increase the tax we will probably still have the lowest rate of corporation tax in the G7 countries. However, a lot of business owners and major corporations will be fairly hacked off.

A sneaky little tax raising exercise that he could use is the freeze tax allowances where they are. That is the rate at which you start paying tax and the level at which you move into higher rates of tax. This mean that he has not broken a manifesto pledge not to raise taxes, but would push over 1.5 million people into high rate tax by 2024.

The pension lifetime allowance looks to be frozen at £1073,100 until the next election. This is the amount that you can have in your pension pot before you get hit with punitive tax charges. In truth in some 35 years as an IFA I have very few clients, sadly for my clients, who will be impacted by this. It is thought that about only 25,000 people will be affected but it could raise about £250 million a year for the treasury.

Anyhow this is all speculation at the moment, we will have to wait for the great man to speak on Wednesday.

On a light-hearted note, I was in the press this weekend that David Beckham has made £4.5 million investing in a Cannabis firm. Hey ho and why not.

Find out more about David and Straight Talk Financial Planning.

Opportunity For Investment Monday Musings 12/04/2021 At the moment because of the relaxation of stamp duty there is a buyer’s market in the UK housing sector, in other words there.

Portfolio Fund Investment Strategies Monday Musings 06/04/2021 There was a fascinating read in the Sunday Times this week about the flop of the Deliveroo listing where the share price fell.

This weeks financial update from Straight Talk Financial Planning Monday Musings 29/03/2021 Let’s start with the fun bit, super hamper for the first two readers who can name the company.