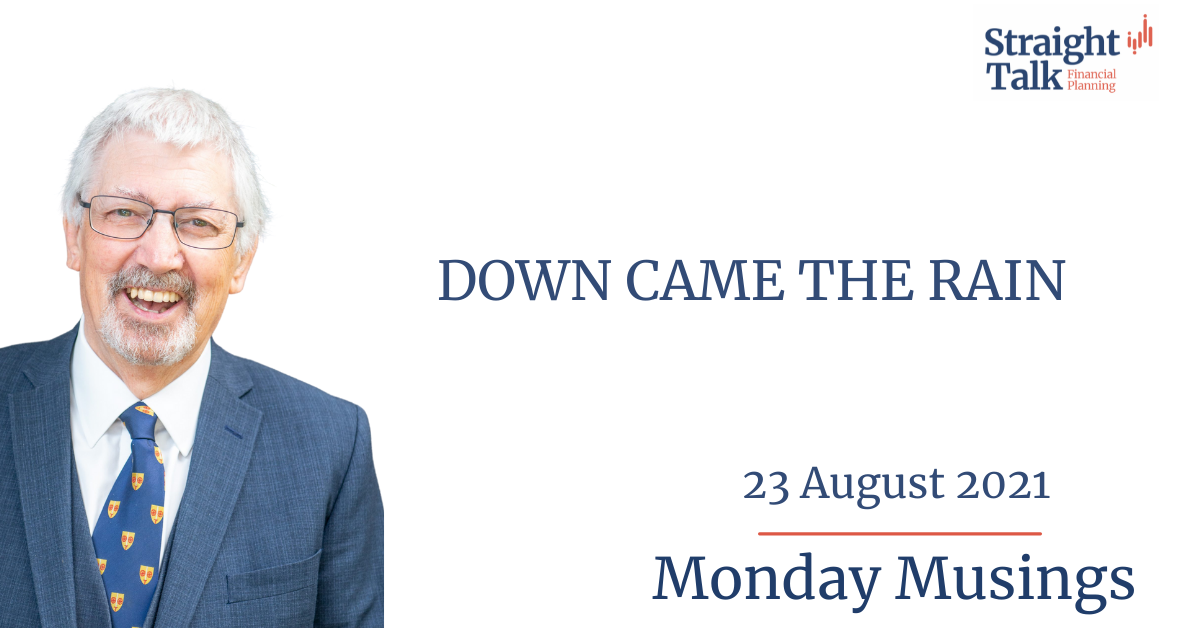 My thoughts this week have been prompted by two events. The first was our annual home barbeque on Saturday, its not happened for a while of course, where we usually have between twenty and thirty family and friends over during the course of the day and evening eating, drinking and generally having a good time. An event such as this requires a good deal of planning which includes making the right investment- see how I slipped that in- to ensure a good outcome. This year I invested in a new bit of kit called “The Big Green Egg” which is without the best bit of barbecue equipment I have. So, the day before I started to slow cook some great beef in the egg. I had the pulled pork and spare-ribs going well in my Bradley Smoker- another fantastic machine. Carmen had all the other food stuff under control. I ordered all the tables, chairs etc so that we could convert our garden into an outdoor dining space of great beauty.

Then as the song goes “Down came the rain.” What to do, the fundamentals were in place, the price paid for the units was right, but it looked like the investment was going down the pan. So what we did was move indoors. Although at first a bit scary, at 3am Sunday when we got rid of the last of the mob we did a quick calculation and realised that we had achieved the objective of getting a great return on our investment as everyone had a fantastic time, old friendships were renewed after so long and the family bonds strengthened even more.

The point of the above is that investments are very much like planning a barbeque and the rain falling. There is hardly ever a period when your investments work entirely as planned but provided you have someone who is able to take the right decisions on how to deal with whatever the issue is you will be OK.

The other thing that came to my attention this week was the fall in the number of Lasting Power of Attorneys (LPAs) that have been registered in the last twelve months. In this period the number dropped by nearly 25%. I cannot emphasise how important it is to have an LPA in place as not having one can lead to dreadful complications and enormous expense. As some of you know in order to help our clients we formed a sister company called Straight Talk Estate Planning to make it easier for them to get advice on LPAs, Wills and Trusts. We did this because I am so convinced that these are such an important part of Financial Planning and were being missed out because people either did not know about them or thought they were complicated and only for the rich folks. They are not, they are relevant to almost everyone. If you would like a free consultation about LPAs, Wills or Trusts please get in touch with Caroline Rupik who is the MD of Straight Talk Estate Planning on the usual number 02380243665 or by email caroline@straighttalkfinancial.co.uk

Just Too Late - Monday Musings 20/09/2021 I have just returned from visiting my family in Guernsey. Among my relatives one runs an offshore trust company, and another has a.

What We Pay For

Monday Musings 13/09/2021 - What We Pay For I am reminded each week that David Stewart, or the Sage of Hampshire, manages to predict the important news stories.  Unfortunately, he’s.

Facing Reality - Monday Musings 06/09/2021 Uniquely I would like to start this week by welcoming a new reader, welcome Mr F glad to have you on board. I was.